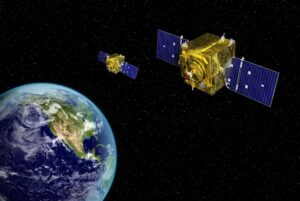 The U.S. Space Force this month is testing two recent launched Geosynchronous Space Situational Awareness Program (GSSAP) satellites, bringing the constellation to six spacecraft that use cameras and other technical means to monitor what’s going on in the all-important orbit more than 22,000 miles above Earth.

The two satellites, built by Northrop Grumman, were launched Jan. 21 atop a United Launch Alliance Atlas V, which lifted off from Cape Canaveral Space Force Station, Space Force said in a news release.

Geosynchronous orbits keep spacecraft stationary above Earth, allowing a satellite to linger above nations in sync with the Earth’s rotation, making it prime territory for military and commercial communications and surveillance satellites, with more than 400 in that orbital plane, according to Space Foundation research. The Pentagon first launched satellites with cameras pointed up to monitor spacecraft in those orbits in 2014.

Space domain awareness has been a key mission for the U.S. military for more than a decade, but has grown in importance in recent years as other nations, including Russia and China, field more capable antisatellite weapons. With GSSAP, the Space Force can monitor movement of all geosynchronous satellites and get close-up imagery to determine the purpose of satellites from rival nations.

While Chinese officials have claimed the craft is designed to clean up orbiting debris, American leaders have expressed concerns that the technology could be used in wartime to snatch enemy satellites from orbit.

The Chinese move came ahead of U.S. Space Command’s first major training exercise of 2022, “Space Lightning,” which ran from Jan 26 through Feb 2.

The command, headquartered at Colorado’s Peterson Space Force Base, said the exercise was designed to “provide training opportunities for USSPACECOM to exercise assured missions, with a specific focus on ensuring readiness to support integrated deterrence and provide the space-enabled combat edge upon which the joint and combined force depends.”

Posted in Launches and tagged Northrop Grumman
Scroll To Top