Introduction | The U.S. Space Force (USSF) has marked its first anniversary and secured a public affirmation from President Biden’s administration that the nation’s newest military branch will endure, allowing Space Force leadership to confidently move forward with their mission. 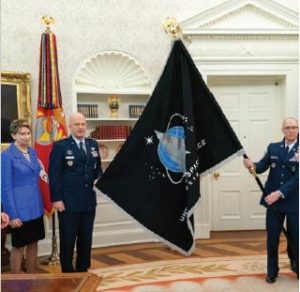 From the outset, the U.S. Space Force had a daunting charge: Assume responsibility for multiple systems and capabilities spread across various military branches and government agencies to better manage space assets — and increasing threats — in a growing space ecosystem.

Established in 2019 under President Donald Trump, Space Force was enacted under legislation that had bipartisan support. It was viewed skeptically by some, or as unnecessary, whether from Washington insiders advocating for less bureaucracy or a general public with little understanding of increased space activity and concerns over militarization of space.1

By its first anniversary, Dec. 20, 2020, Space Force accomplished rapid growth and a string of firsts, but those achievements were overshadowed by ongoing public relations issues,2 the prospect of a new commander-in-chief, a new acting secretary of the Air Force, and congressional inquiries about a delayed mandated report on space acquisition reforms.3

As of Feb. 1, 2021, nearly 90 nations and 6,589 payloads operate in space, and there is increasing recognition of economic opportunity beyond Earth’s atmosphere, which invites competition for assets. China, Russia, and India have conducted anti-satellite tests, and the global economy and daily life on Earth could be severely disrupted if satellite-based services ceased. Referring to China and Russia, Gen. John Hyten, vice chairman of the Joint Chiefs of Staff, in January 2021 told the National Security Space Association of the two countries: “They’re building capabilities to use space against us. We have to be able to respond to that.”4

During the ceremony officially standing up USSF, Chairman of the Joint Chiefs of Staff, Army Gen. Mark A. Milley, described the basis for the new branch: “In military operations, space is not just a place from which we support combat operations in other domains, but [has become] a warfighting domain in and of itself.  Our adversaries are building and deploying capabilities to threaten us, so we can no longer take space for granted. The U.S. Space Force is the necessary and essential step our nation will take to defend our national interests in space today and into the future.”

“We’re actually working on a dual componency, where instead of having Active, Guard, and Reserve, we have a combined Active and Reserve force, and then potentially a separate Space Guard,” she said.

To read the full article, subscribe to The Space Report here.

Please confirm deletion. There is no undo!