By The Space Report
research@spacereport.org 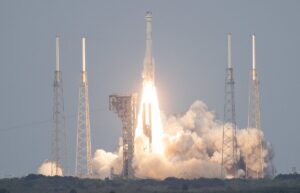 Boeing’s Starliner capsule reached the International Space Station on Saturday after its launch atop an Atlas V from Florida. Credit: NASA

NASA’s launch of the Boeing Starliner space capsule on Friday to deliver astronauts and gear to the International Space Station added another highlight to 2022’s launch tempo, the most rapid ever seen.

The Starliner capsule reached the ISS on Saturday after launching from Florida atop an Atlas V from United Launch Alliance. The docking was the first time the Starliner capsule docked with the ISS. It was one of the 58 launch attempts in 2022 through May 23 and the 56th successful launch to date, eclipsing year-to-date records for both categories, statistics compiled by The Space Report show. It helped topple the record of 57 launch attempts through May 23 set in 1967, as the United States and Soviet Union raced toward the Moon. The prior record for successful launches through May 23 was the 54 logged in 1978, with missions that included sending the first Global Positioning System satellite from the United States and sending the first cargo vehicle to the Soviet Union’s Salyut-6 station, an ancestor of the International Space Station.

The 56 successful launches to date in 2022 include payloads for 31 nations among the 720 satellites and space vehicles that have arrived to orbit.

Mark Clampin, who heads NASA’s Sciences and Exploration Directorate, said Monday that 2022’s pace shows a quickening of the already heated race to orbit among nations and commercial firms.

“There’s a palpable sense that the space business is changing at an exponential level,” he said.

The Starliner joined SpaceX’s Dragon, Northrop-Grumman’s Cygnus, and the Roscosmos Soyuz as vehicles that can carry payloads or astronauts to the station. Boeing’s capsule is designed to carry 800 pounds of cargo or four astronauts to orbit.

Starliner, which suffered anomalies in a 2019 attempt to reach the station, has been in development since 2010. It was expected to return to Earth on Wednesday, with a parachute landing in New Mexico.

“The spacecraft will return with more than 600 pounds of cargo, including Nitrogen Oxygen Recharge System reusable tanks that provide breathable air to station crew members,” NASA stated in a news release. “The tanks will be refurbished on Earth and sent back to station on a future flight.”

The capsule arrived at the station after rising political tensions between the United States and Russia over the war in Ukraine revealed cracks in the ISS partnership between NASA and Roscosmos.

The Russian agency in April threatened to bow out of the ISS program, after nations including the U.S. imposed economic sanctions on Russia over the February invasion of Ukraine.

NASA leaders focused on the capsule’s success rather than Russian threats.

“I am so proud of the NASA, Boeing, and United Launch Alliance teams who have worked so hard to see Starliner on its way to the International Space Station,” stated NASA Administrator Bill Nelson after the capsule’s launch.

The pace of launch is expected to accelerate later in the year as some of the 15 new launch vehicles projected to make maiden flights in 2022 lift off.

Among the upcoming planned launches is the first flight of NASA’s Space Launch System, expected to return astronauts to the Moon, and the liftoff of Australia’s first launch vehicle, the Eris.

Also expected in 2022 is the first flight of Space-X’s Starship, a reusable rocket and spacecraft designed to lift 100 tons to low Earth orbit, along with new offerings from United Launch Alliance and Arianespace.

Posted in Launches
Scroll To Top